Rather optimistically, we had planned to visit some of the “Bodegas” on Monday morning prior to the 120 mile trip to the port of Santander. This wasn’t the best planning we had made on this trip as many of the wineries didn’t open until 09:30 and we needed to be rolling by 11:15. The Rioja wines were also expensive (well it’s all relative compared to blighty) but they were sufficiently priced to really need a prior wine tasting and we just didn’t have the time.

So we left Haro on time but with no wine additions.

The drive to Santander was not exactly un-eventful because once in the Bilbao area, we were diverted through the most spectacular roads and tunnels which hadn’t previously shown up on the satnav – which, after all is only some 6 months old. At one point, we were suspended hundreds of feet in the air on a kind of horse-shoe sticking out of the mountain. Moe exclaimed “Oh, look at the view”. I nearly stopped the car and abandoned it on the spot. Am not good with heights!

The ferry left on time and dinner on-board was excellent. Up to the standard of your best cruise ship. 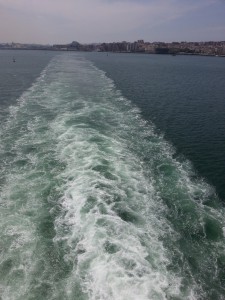 Our arrival into Portsmouth was delayed by 2 hours because another Brittany ferries ship was berthed at our dock and we had to wait for its departure, complete with its “cargo” of veterans making the pilgrimage to the 70 year D-Day celebrations.

We arrived home early in the evening, thus concluding this trip.

An early start on the Sunday with the intention to leave shortly after the main gates opened – probably the coolest gates we have seen – since they use ANPR (Automatic Number Plate Recognition) to open and close the barriers for the car. 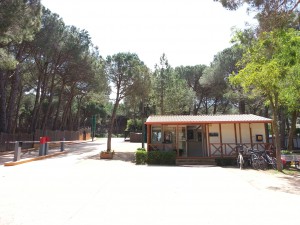 The ever helpful campsite staff had withdrawn a moveable post to allow us to manoeuvre the caravan off the pitch a little easier. They were on-hand to open barriers for us before the ANPR and wished us a safe journey.
The journey was smooth and uneventful, covering around 400 miles in some seven to eight hours, arriving later in the afternoon at Haro. 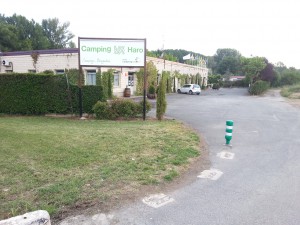 We found a nice pitch but after discovering the electrical hook-up lacked an earth grounding, we unwound all of our cables to reach a nearby electrical cabinet. Maybe we are paranoid but I put great faith in our mains tester and after all, electricity has an earth cable for a reason… At least that’s what my Physics degree taught me!

Haro has some beautifully restored “Bodegas” (wineries) which we intended on visiting the following morning. The town itself is a little “scruffy” in places but we enjoyed a beer or two outside one of the cafes and then dined in a local Tapas bar.

Saturday is preparation day and we had cleaned and cleared up by early afternoon. We spent a little time taking a few photos of the campsite. 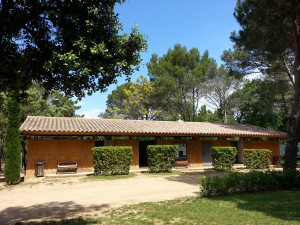 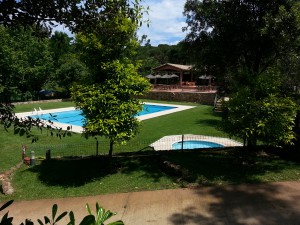 That left us with a few hours in which to visit Tamariu. About a 1 hour walk down to the beautiful cove and beach but at least an extra half an hour to walk back up again. 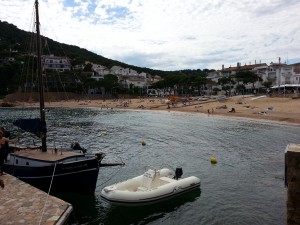 The hills remain steep around here!

We had visited l’Estartit on the bikes earlier in the week and noted that there were a number of boat trips from the port. 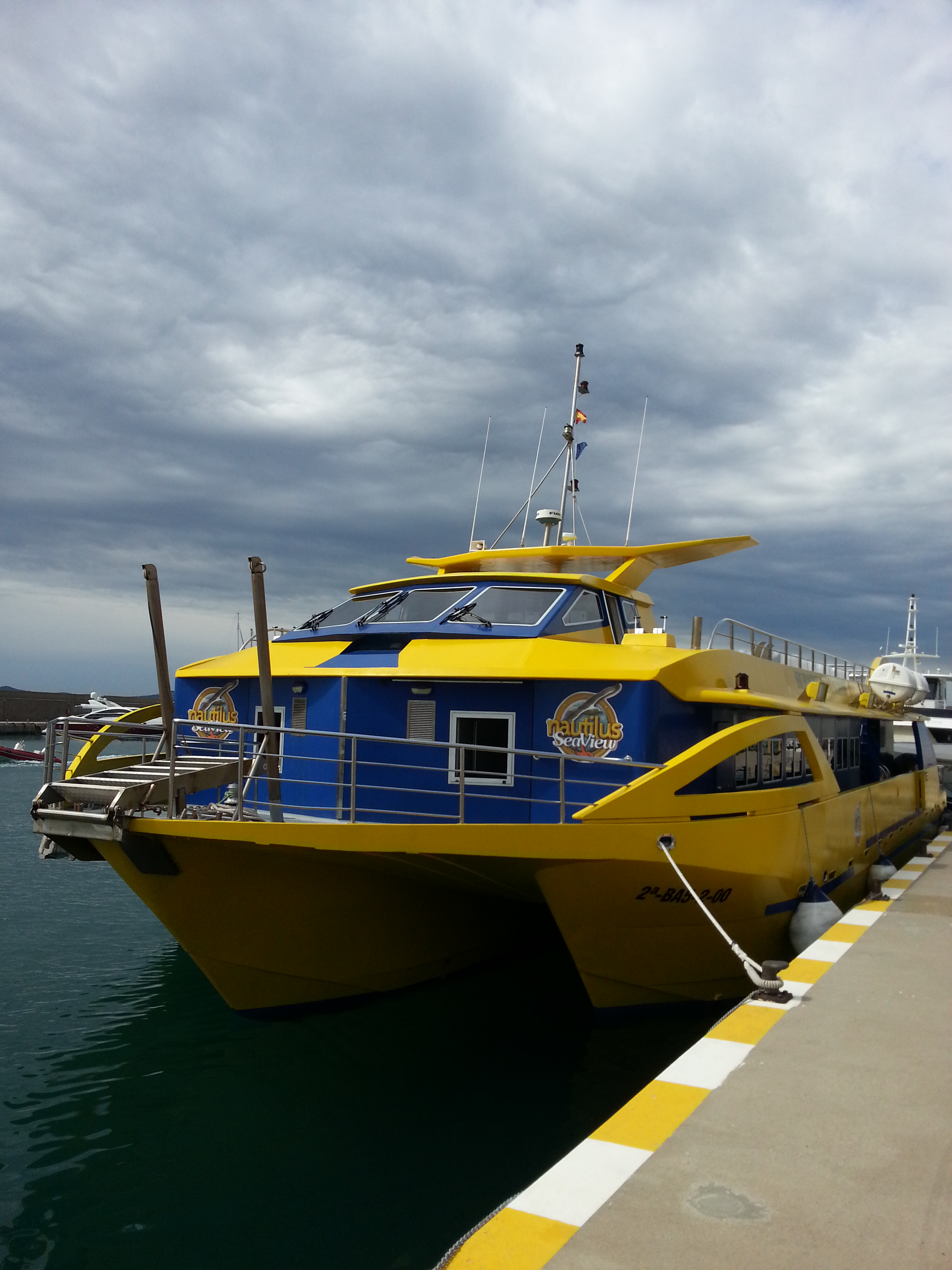 Nauticus was the company we chose, a large catamaran with glass walls in one of the hulls. Weather was good and it was nice to do a real “touristy” thing for the first time this trip. 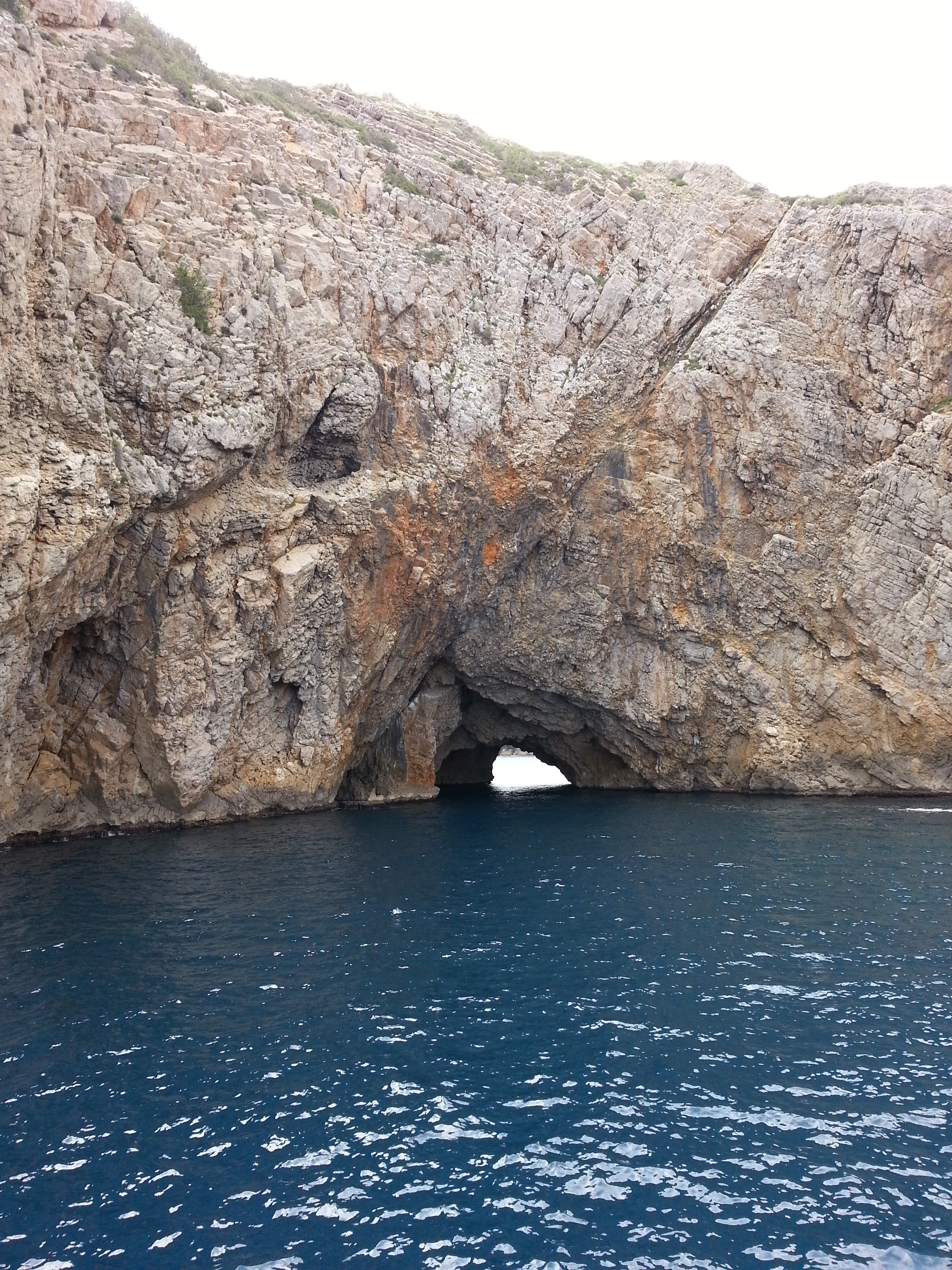 Arch across the sea

Afternoon was exploring the town of Pals. 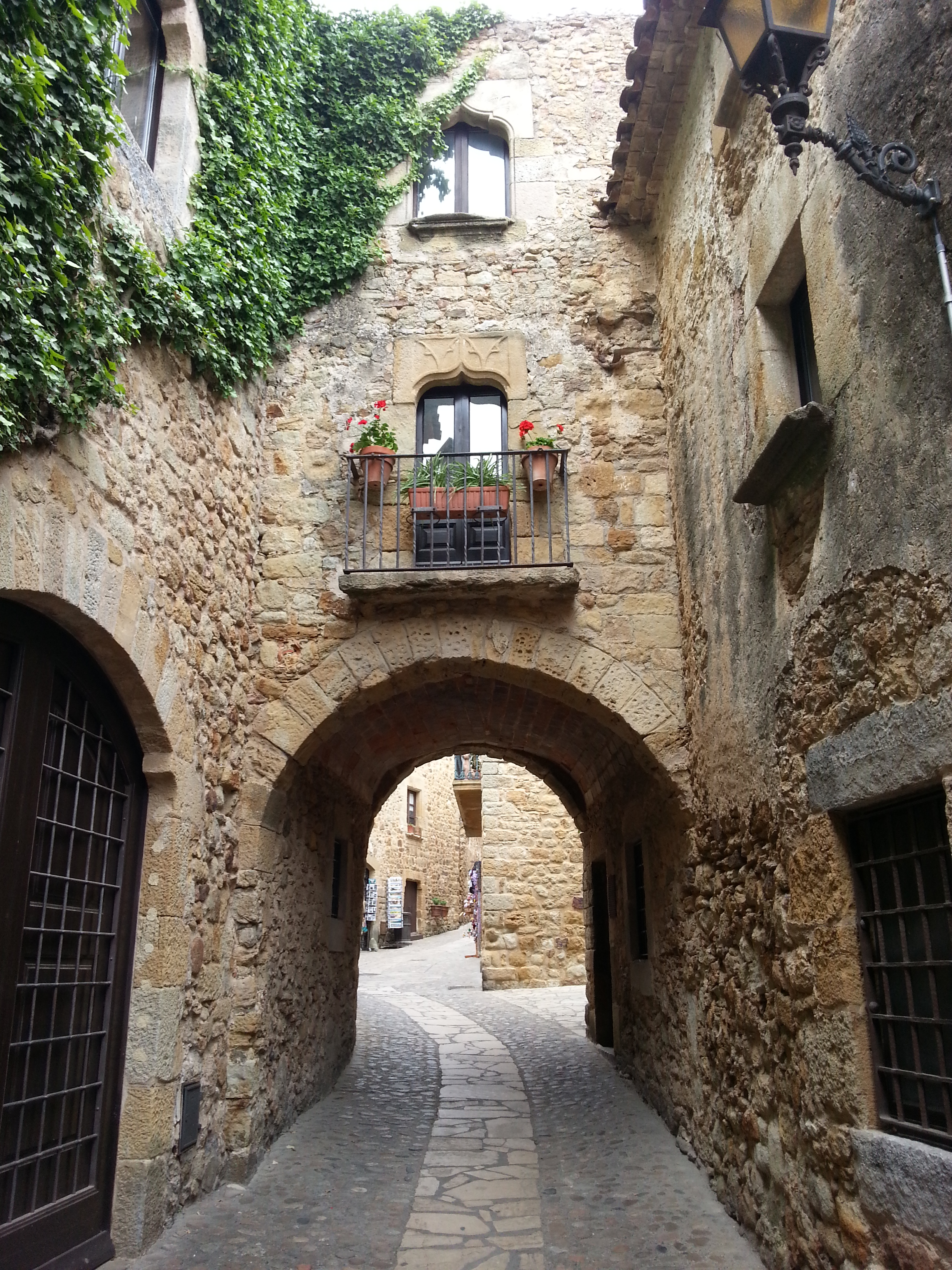 The ancient streets around Pals

A beautiful medieval village close to Begur and well worth a wander round.

Today was Friday so as is our tradition in blighty, a few beers to celebrate the end of the working week. On this occasion at the main square in Begur. The end of this adventure is drawing to a close with tomorrow scheduled to be a preparation day.

This was probably our final outing on the bikes and at the end of the ride we expect to have covered some 300km in total during May.

You can see the challenges of getting the bikes atop Sorento. 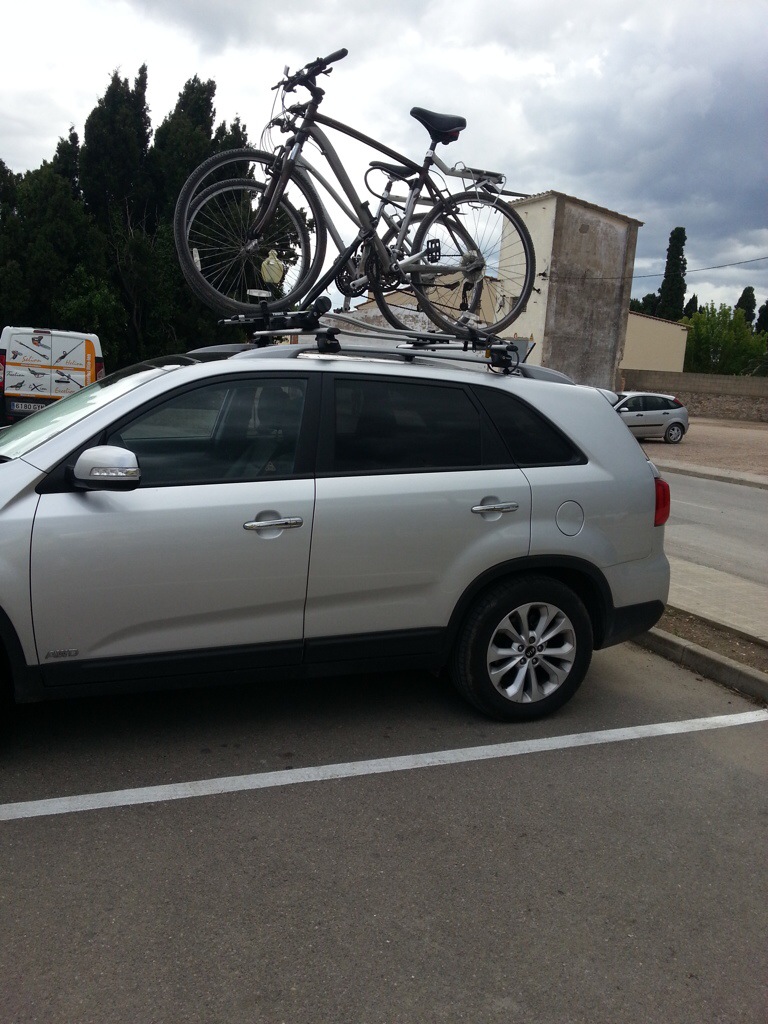 Almost spilled one today when it got tied up with the steady bar!

We think the northern trail alongside the Ter is prettier than the southern one. It’s certainly a lot smoother and at the end, a short detour to l’Estartit is very pleasant. At the end of this ride was El Mas Pinell which encompasses an enormous campsite, “el delfin verde” (which we figure translates to “the green dolphin”; make what you want out of that!) and lots of urbanisation – probably holiday homes. Even the supermarket was closed presumably waiting for the busy season to commence.

Here’s a picture from alongside the Ter, highlighting a concrete aquaduct for irrigation. 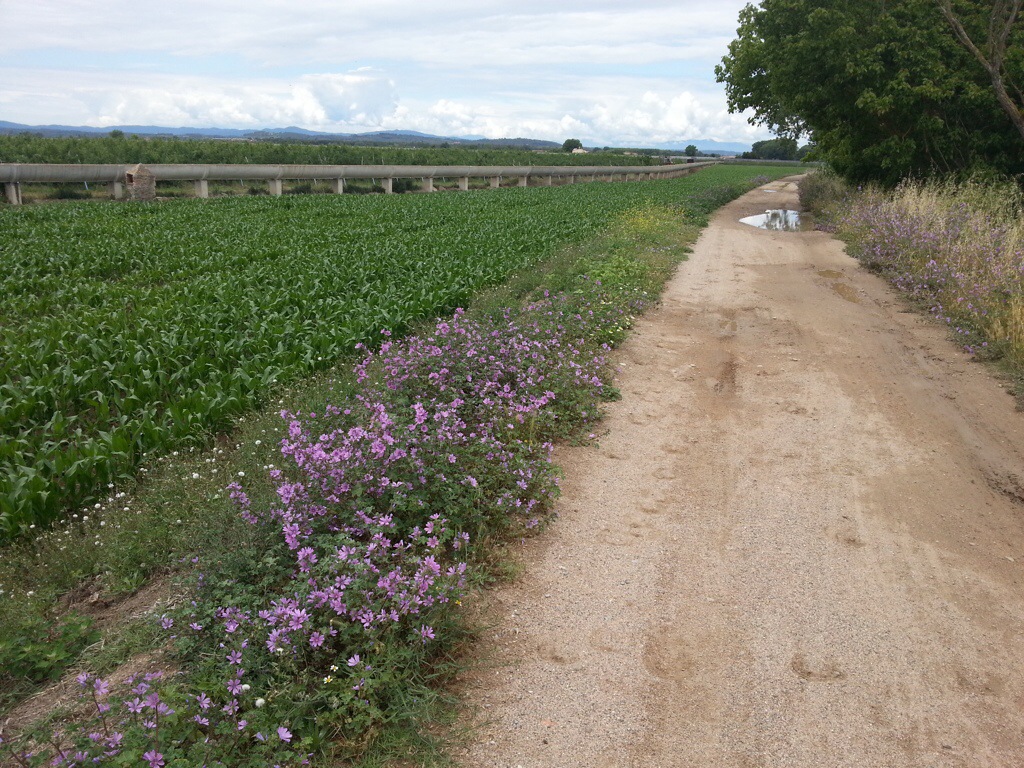 South bank of the Ter

We have been intrigued by this all through our trip to Spain. Concrete aquafers everywhere presumably channelling the water down from the mountains.

Finally, I promised an update on the tyres. 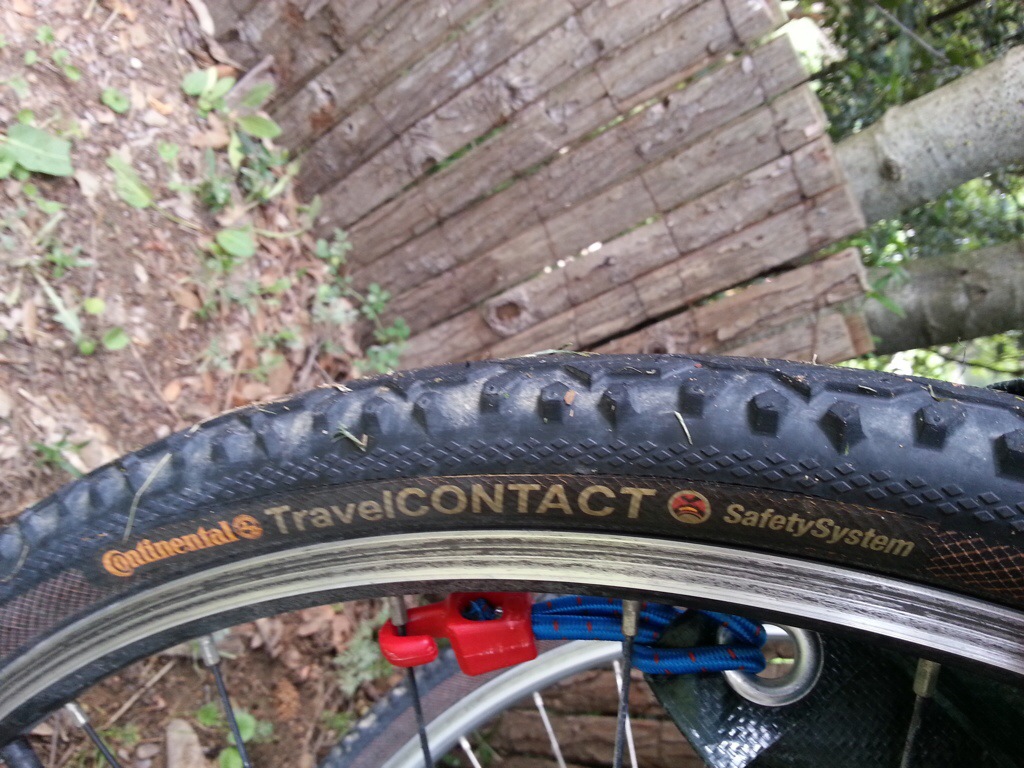 Remember at the start of the trip we ditched the crummy Specialized Borough tyres, which were puncturing around every 10 miles, with even small pieces of shale / gravel capable of piercing the flimsy rubber.

Well the Continental Travel contacts have been brilliant. Not a single puncture between us during the entire period. Thumbs down to Specialized on that one.

Notably this morning I had a document emailed to me for signature which needed to be returned. Stunning service from the staff at Camping Begur as they printed it out and then scanned and emailed me a copy of the signed paperwork, none of this effort being any trouble whatsoever. We like it here.

After a relaxing morning (and half the afternoon) chilling, we headed to France to do some shopping at one of their Hypermarkets and garden centres. The satnav let us down somewhat today in that we were dumped in a local housing estate rather than the local commercial centre. Or just maybe, it wasn’t programmed correctly.

In all honesty the shopping was disappointing. The garden centre, whilst stocking some nice stuff was like the Waitrose (and beyond) of shopping. Good news though as I managed to buy some socks to supplement the sole pair we remembered to pack. Good job sandals were mostly the order of the day!

After a dreadful day of rain yesterday we were both keen to depart the confines of the van and even Moe agreed to another cycle ride so close to the previous one and without full recovery time from a sore ***. 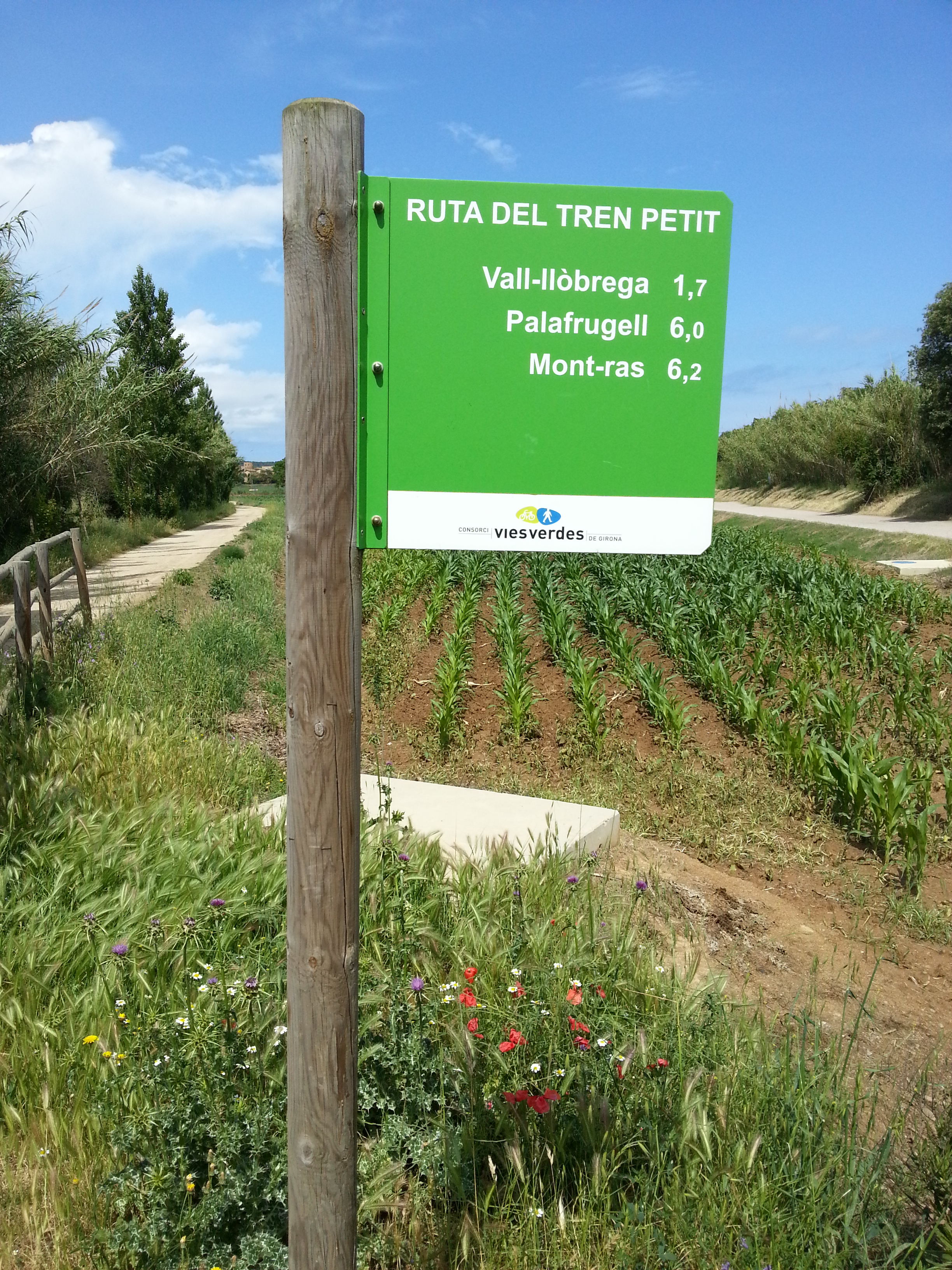 Cycle route from Palafrugell to Palamos (and back!)

We had researched a route from Palafrugell to Palamos which followed an old railway line. Routa de tren petit.

The immediate hills and roads around Begur haven’t got any less mountainous or wider since our arrival so the plan was to drive the bikes to Palafrugell and then cycle from there. For once, we didn’t take a picnic. Moe had thoughts that we would be back for lunch (this was at 10:30 am) but I was rather doubtful we would have even loaded the bikes atop the Sorento by then. Still, there would no doubt be an opportunity for a late lunch in Palamos.

We parked at the Aldi in Palafrugell and quickly found the cycle trail meandering its way to the coastal town of Palamos which took around an hour, including a few stops to check “mapswithme” to make sure we were headed in the right direction.

We lunched at a Tapas bar, with the small portions aptly suited to the healthy days cycling although

The bay around Palamos

I think both of us would have liked a nice “menu of the day” somewhere. After lunch we headed from one end of the bay to the other – a full 4km and all on the beach front (“board walk”) so totally traffic free. There was a chill in the air and the sea front was fairly free of people also. We have been immensely impressed with the infrastructure in Spain – be it the roads, railways or cycleways.

Dinner was a BBQ with some huge chicken and steak (we think) kebabs. Within 10 minutes of firing up the Weber, the storm clouds gathered and the heavens opened and the skies were filled with thunder and lightening. 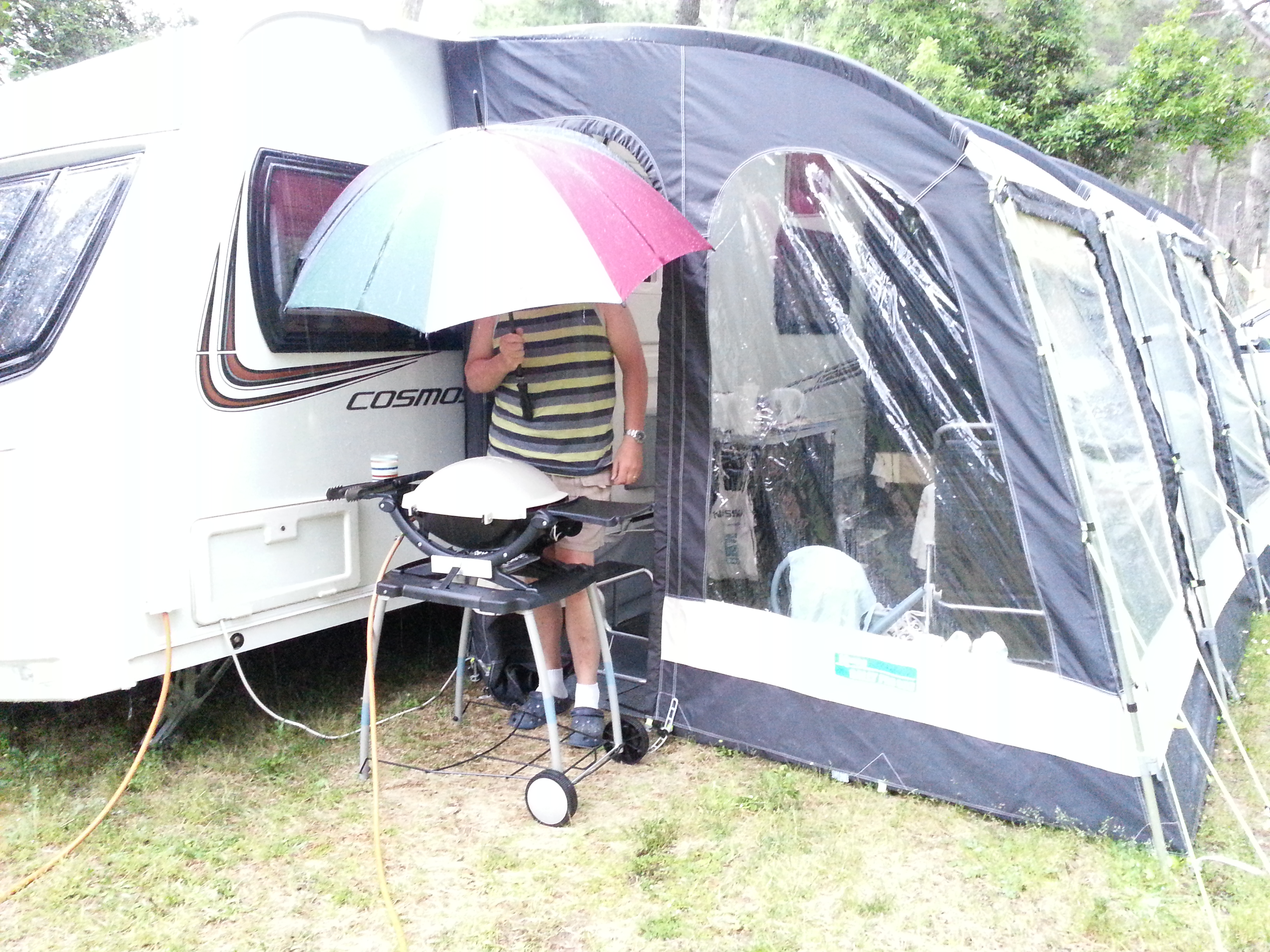 Nothing, however was destined to deny the intrepid travellers their well earned meat feast.

Perfect opportunity to update the diaries and work on the new WordPress blog.

Had a short break from the computer and the rain around lunchtime which gave the chance to sort out some chores including cleaning the car. This site is 5*s all the way and even has its own car jet wash area. Nice.

Today we traveled from Camping Begur some 40 miles to the village of Bessalu. A nicely preserved medieval village with some stunning viaducts. 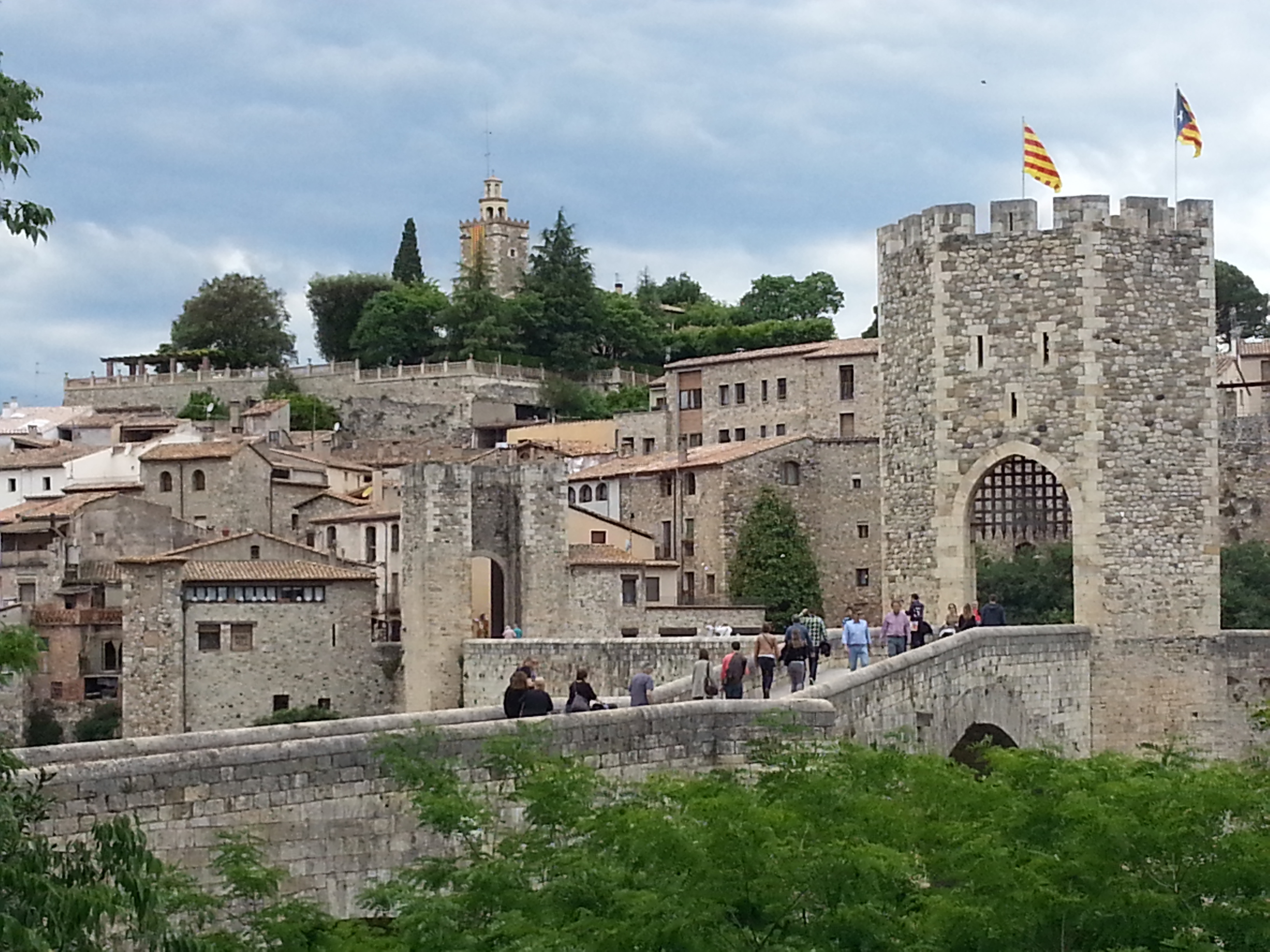