Today was the third and final day of the Chatsworth country fare and Moe had some crazy idea to watch the hot-air balloons departing in the morning.

Whilst this might seem a worthy outing, the problem was the start time of 07:00 and therefore exiting slumber the wrong side of 06:30. 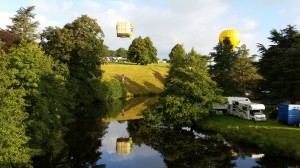 There were around 40 balloons setting sail from Chatsworth and it was quite a spectacle. The air was very still and the initial flight over the river somewhat problematical. Most balloons bounced along the floor just before the river before ascending into the sky, whilst a considerable number just abandoned flight altogether without gaining sufficient altitude. 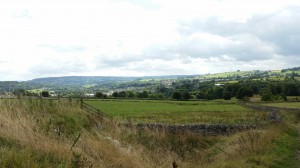 A late morning walk was undertaken from Bakewell followed by a snack in the Red Lion.

Moe managed to buy herself a tart in Bakewell before we headed back to the CC site, at which point the sun adorned the sky and we enjoyed the warmest afternoon of the trip.

The Chatsworth House country show is being held this weekend and visiting it involves a short walk through the hole in the wall from the CC site into Chatsworth grounds.

We spent all day looking around, clocking up 8 miles on the pedometer in the process.

Lots to see and do. We are familiar with the Newbury Show and have to admit this appeared to be on an even larger scale. 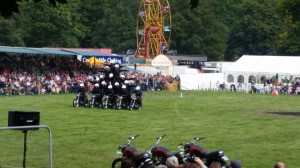 The White Helmets motorcycle show. Part of the Royal Signals. 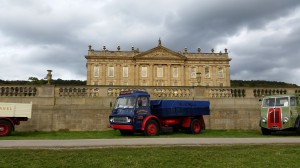 Nice photo of Chatsworth House without a single person in view. Quite a feat actually!

Re-scheduled from the previous day to fit in with our reservation at the Pack Horse in Little Longstone, we started out on the 7 mile hike from close to the pub in the early afternoon. 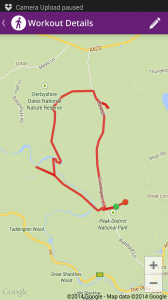 We remembered again to activate Map my Walk and the route taken is shown in the picture. The first detour was through one of the tunnels on the Monsal Trail and the second change of direction was at Wardlow where the heavens opened just after setting out across the moorland.

In the end we headed back to Wardlow and walked along the road before finally arriving back at the Pack Horse in time for dinner. 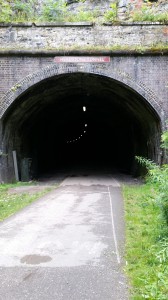 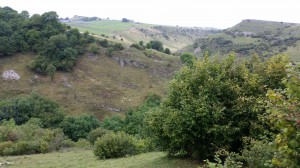 The food and real ale selection was truly first rate and we spent the early part of the evening eating and trying to warm up.

To round off a thoroughly pleasant day, someone stole our mosaic solar lights. First time in decades of camping and caravanning across Europe that anything has gone walkabouts. Still, there’s a country show on at Chatsworth this weekend and there are lots of people wild-camping just over the wall in their Hobbys, Fendts etc…

Another relaxing morning working with technology which sometimes appears to make things harder and not easier. Trying to get to grips with the new Galaxy S tablet to create our WordPress blogs and postings and it isn’t always easy to abandon the laptop. Still a bit of progress each day.

In the afternoon we planned to do the second short walk of around 7 miles ending up at v the Packhorse in Little Longstone but when we tried to book a table for dinner,  the place was full. So we booked for Friday and will report back later on the food. So, we hiked up the River to Calver and had a couple of pints of Pedigree at the Bridge Inn. 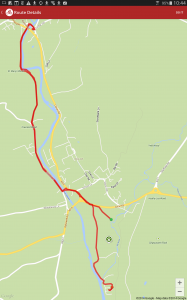 Remembered to activate Map my walk and here is a picture of the route. Although only remembered to start the app part way through.

About 6 miles in total.

A relaxing morning reading the first book of the trip. A Wanted Man by Lee Child. Another of his books which are impossible to put down once started. In the afternoon, we drove the short distance to Bakewell and walked around the rather quaint town. Witnessed a “100 year old driver” in a Nissan Note rear-ending a Vaughan Insignia. The entire front end of the Note looked about ready to droplay off whilst the Insignia had what appeared to be a few minor scratches to it’s bumper. 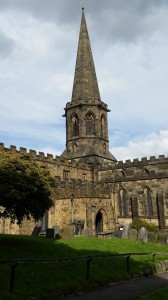 Picture of the church in Bakewell.

Today was spent at Chatsworth House – a trip around the house itself followed by several hours walking around the gardens. There probably isn’t much I can say to do justice to the opulence of the house and gardens and if you are visiting this CC site then undoubtedly Chatsworth House will be on the “must see” list.

The tour of the house and grounds costs about £20 per person but we had a 2-for-1 offer after Moe’s visits to Hatfield House and Sue got a £5 discount courtesy of us staying at the Caravan Club site – worth remembering.

A few pictures of the house and gardens. 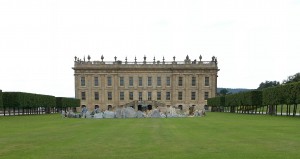 View of the house from the lake and fountain 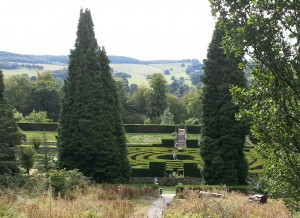 The maze at Chatsworth 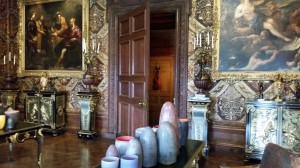 If you look carefully in this picture you can see a violin hanging from a door knob. However, the knob is real but the violin is actually a painting. 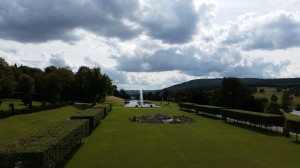 View of the Lake and fountain

On arrival, we bought a book called the Golden Miles which provides details of a 35 mile walk around the Peak District. There are also a series of shorter walks based upon the main route which are circular. 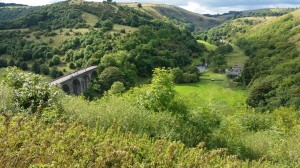 We were joined for the walk by our daughter Sue who travelled up from London. Eventually – as she missed the first train and had to buy another ticket. Lol.

The walk is around 5 miles and took just over 2 hours. There are lots of pubs on the route so plenty of opportunities for lunch and refreshments.

Tonight we have booked a table at the Italian restaurant Il Lupo in Baslow.

This was our first full day at Chatsworth after spending the previous day visiting relatives in Yorkshire.

We chilled in the morning, spending much of it organising our diaries and travels for the remainder of 2014. In the afternoon we hiked around Chatsworth House grounds which are accessible directly from the CC site via a locked gate in the wall.

Evening was nice enough for a BBQ. 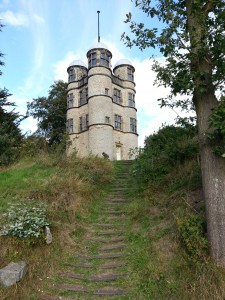 Hunting tower in the grounds of Chatsworth House 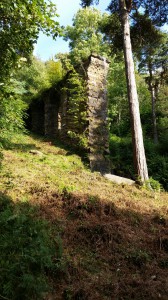 The walk took us right past this Aquaduct which appears to provide much of the water for many of the water features at Chatsworth.

Commuting around the M25 has been almost pleasant during the summer weeks so when the satnav highlighted A34 delays the decision was taken to route to Derbyshire via the M4 and M25. This turned out to be a big mistake as the M1 was down to a single lane at Milton Keynes. We left the M1 shortly after the M25 junction and took the A5 all the way to Towcester.

From there to Baslow was relatively trouble free (by Blighty standards only I must add) with a mid-afternoon arrival at the Chatsworth House Caravan Club site.

This is a stunning location and we have rented a Super Pitch for the 13 night stay. And the pitch is great. The usual electricity, water and grey waste facilities BUT complimented by our own personal chemical disposal drain.

The evening entertainment was a walk into Baslow through the grounds of Chatsworth House, via the “private” door-in-the-wall and dinner at the Wheatsheaf. 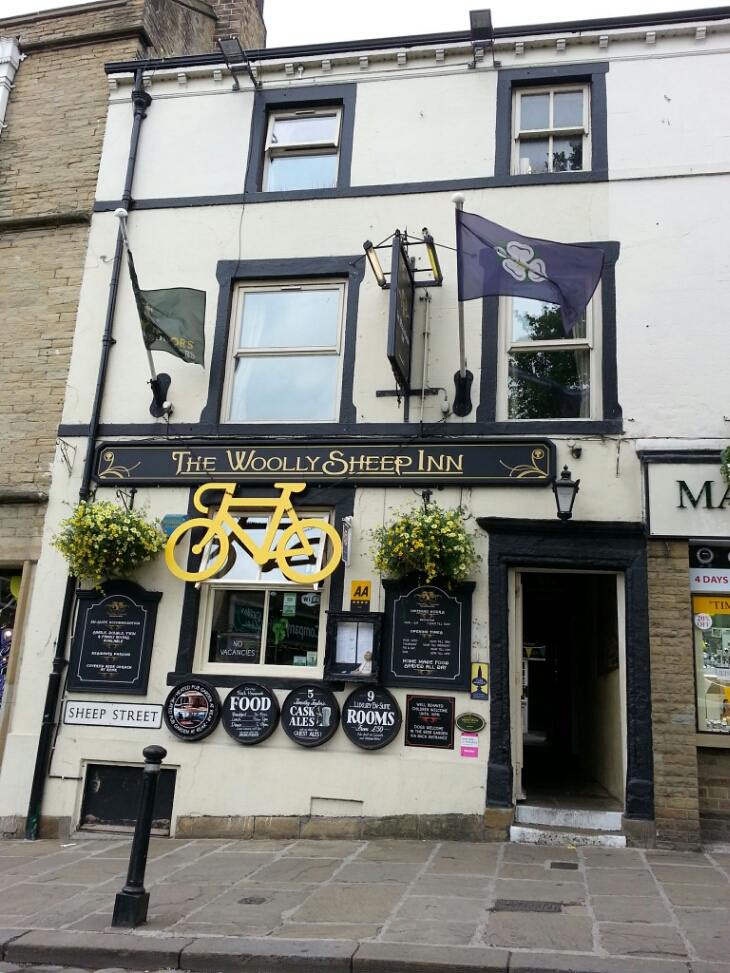 This is a sample