Here is some information about our Isabella shadow sun canopy. 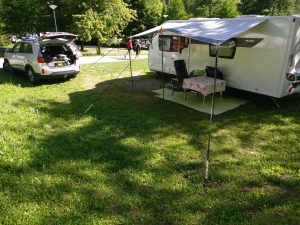 We tend to use this for shorter stays (up to 1 or 2 weeks) particularly on the continent but even if it isn’t warm or dry enough to sit under in the UK, it still provides shelter for the caravan steps and shoes next to the door.

It is the most straight forward awning to erect and remove we have tried. Believe me, we have bought and discarded a lot of awnings! It’s lightweight and folds easily with lots of room in the supplied Isabella bag. It comes complete with some really big plastic pegs (which we haven’t used yet) and also some very strong guide ropes. 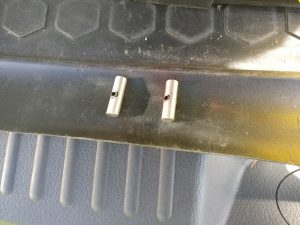 Once in position in the awning rail, we secure it with two awning rail clamps. This helps restrict the “sail” effect and stops it moving laterally. 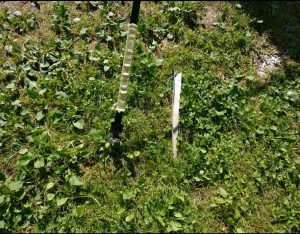 Tie down pegs and straps…

We then secure it with the biggest pegs we feel we can get in the ground and then use some serious tie-down straps.

We also peg each foot of the poles to stop any lift effect.

It has let us down twice. The first time, we returned to the van and guess what, the awning had gone. Figuring out someone had taken a fancy to it, a closer inspection revealed it had been folded up under a chair as it had come loose. Hence our move to the bigger straps and pegs.

The second time in Croatia, during a sharp storm, a rock peg lifted out of the ground and the awning collapsed. More details here: https://www.caravanramblings.co.uk/?p=2015.

Now if the pegs look at all unstable, we use the tie down straps supplemented by the guide cords which came with the Isabella. 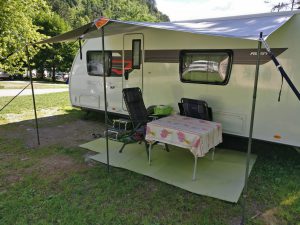 In comparison to the pull-out awnings like the Caravanstore, we feel the sun canopy is comparable for ease of use. After all, most of the time to put these things up is down to pegs and tie-down straps. The unwinding or threading through the awning rail is not substantial.

We would consider a pull-out sun canopy but due to weight limitations we don’t want to add anything further to the van and also, the awning light is above the door and in the way of a such an item.